Many people write in and ask, “How do we know that the earth is 6,000 years old from the Bible?” Given that the chronogenealogies—genealogies where the age of the father at the time of the son’s birth is given in an unbroken chain—end shortly after Noah, how do we get from ~1600 AM (anno mundi = ‘year of the world’) to today, which we would argue is about 6000 AM?

How precisely can we know the earth’s age?

The precision by which we can know the timing of historical events or ages of things is constrained by the precision of the data we’re given.

The precision by which we can know the timing of historical events or ages of things is constrained by the precision of the data we’re given. The timing we’re given in the chronogenealogies is accurate to within one year of the event. By this, I mean we can know that Adam was 130 years old when he fathered Seth, but we don’t know if he was 130 and 3 months, or just shy of 131, for example. This is true for all the ages. So when you add up the chronogenealogies, we know that the Flood happened in 1656, plus up to less than 10 years, because we have 10 numbers that have less than a year of uncertainty. If all of the numbers were recorded just shy of the next birthday (for instance, Adam was 130 and 11 months when he fathered Seth, Seth was 105 and 11 months when he fathered Enosh, and so on), the Flood could have been as late as 1665 AM. But clearly this sort of small-scale uncertainty won’t give any comfort to people who want to add thousands of years to human history.

The Flood to the Patriarchs

There is an unbroken chronogenealogy from Shem to Abraham in Genesis 11, and we’re given the information elsewhere in Genesis1 to extend the chronology until the relocation of Israel to Egypt when Jacob was 130 years old. Going by these numbers, Jacob went to Egypt in 642 + less than 12 years after the Flood, or 2298 + less than 22 years AM. The chronogenealogy ends here, with nearly 2,000 years to go until Christ.2 How do we extend the timeline?

The Patriarchs to the Exodus

Exodus 12:40 says that Israel was in Egypt for 430 years. This harmonizes well with Genesis 15:13 where God tells Abram that his descendants will be enslaved and mistreated for 400 years (enslavement did not happen on their arrival in Egypt but some time after Joseph died, when their number became threatening). So the Exodus happened in 2728 + less than 23 years AM.

The Exodus to the Kings

We know that Israel wandered in the desert for 40 years, meaning that they entered the Promised Land in 2768 + less than 24 years AM. But here the chronology becomes a bit hazier for a while. This is because we don’t know exactly how long the conquest took, or exactly how long it was before the judges started ruling Israel. We’re told how long each judge ruled, and how long each period of peace lasted, but some of these clearly overlap, and some judges clearly only ruled part of Israel, while another judge was ruling another part.

What about different dates for creation?

Many people have come up with dates for creation, such as James Ussher (4004 BC), Johannes Kepler (3992 BC), Gerhard Hasel (4178 BC), and Isaac Newton (~4000 BC). Additionally, there are various chronologies competing with each other today (though all with the same ballpark outcome) which would be more precise than this article, but also rely on assumptions that must come from a particular interpretation of the text. It is not the purpose of this article to choose any particular one of these chronologies, but rather to show how the plain interpretation of Scripture gives a straightforward chronology that leads us to believe the world is around 6,000 years old, regardless of which of these other chronological frameworks one uses.

It’s clear that from the very first verse of Genesis, the Bible is concerned with giving a factual account of how God has interacted with the earth.

But we have a clear statement in 1 Kings that allows us to continue a reliable chronology. 1 Kings 6:1 says “In the four hundred and eightieth year after the Israelites had come out of Egypt, in the fourth year of Solomon’s reign over Israel, in the month of Ziv, the second month, he began to build the temple of the Lord.”

So if we subtract 124 years (40 each for the wandering in the desert, Saul’s reign, and David’s reign, and 4 for the partial reign of Solomon), we get a period of about 356 years for the judges, which fits well with the numbers in Judges if we assume a few overlaps. So Solomon began to build the Temple in 3208 + less than 23 years AM. Notice that even though we’re thousands of years into history at this point, the uncertainty about the dates is less than 25 years!

The Kings to the Exile

The Bible is history!

It’s clear that from the very first verse of Genesis, the Bible is concerned with giving a factual account of how God has interacted with the earth. This means that it must give historically accurate details, as well as being theologically accurate. In fact, what we believe about God is based on historical claims, so if the history is inaccurate, then the theology must be as well! One of the ways the biblical authors communicated that they were giving actual history is by recording lifespans, or measuring the amount of time between certain events.

We can be confident that God’s Word is accurate in its historical details as well as in what it tells us about theology.

From Creation to Salvation
by Lita Cosner
US $14.00
Soft Cover

The Genesis Account
by Jonathan Sarfati
US $39.00
Hard Cover 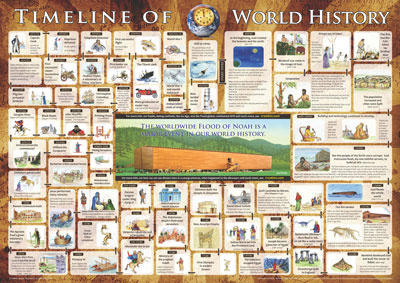